One of the biggest bands of the 1980s, Duran Duran, are coming to Harveys Outdoor Arena on Friday 13th September 2019! The multi-platinum-selling British new wave group will be performing tracks from their most recent album, 2015's Paper Gods, as well as a variety of chart-topping hits and rarities from their booming career! Get ready to reminisce and sing your heart out at this high-energy, nostalgic party! 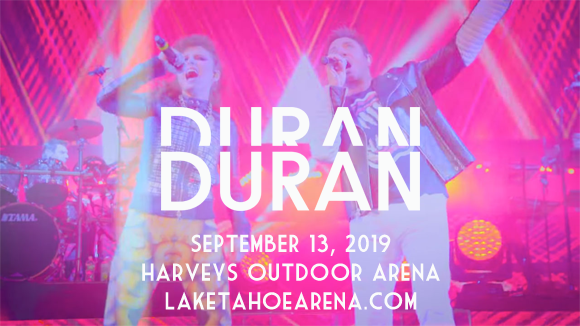 Formed in 1978, English new wave band Duran Duran began their career with a new romantic sound, alongside fellow British bands like Spandau Ballet and Visage. The band had a quick succession of line-up changes throughout its early period, but with the classic combination of keyboardist Nick Rhodes, bass guitarist John Taylor, drummer Roger Taylor, guitarist Andy Taylor and lead singer Simon Le Bon, the group soon became one of the most iconic and successful bands of the 1980s. Making their debut in 1981 with an eponymous album, Spandau Ballet found mainstream success with their third single, "Girls on Film," which had a racy accompanying music video that was played on heavy rotation on MTV all across the world. The group found even more success with their second album, Rio (1982), which launched four UK Top Twenty singles with "My Own Way", "Hungry Like the Wolf", "Save a Prayer" and the title song "Rio", and peaked at number 6 in the US, where the group found increasing popularity. By the following year, the band's music videos had led to a huge US following and the band were becoming known as the “Fab Five” (in reference to the Beatles). They are considered part of the  Second British Invasion of the US in the 1980s. To date, the band have charted 14 singles in the top 10 of the UK Singles Chart and 21 in the US Billboard Hot 100, and have sold over 100 million records worldwide. In addition, they also have several awards, including two Brit Awards (including the 2004 award for Outstanding Contribution to Music), two Grammy Awards, an MTV Video Music Award for Lifetime Achievement, and a Video Visionary Award from the MTV Europe Music Awards, as well as a star on the Hollywood Walk of Fame.