Old Dominion comes to Harveys Outdoor Arena on Saturday 24th July 2021. Join the five, Nashville stars of Old Dominion, famous for their singles such as, Break Up With Him, No Such Thing as a Broken Heart, Song for Another Time and One Man Band. They have gained momentum and recognition as country stars since their first EP was released in 2012, continuing to gain respect and admiration for their skills as musicians and songwriters.
so, book your tickets for a night with Old Dominion and enjoy their smooth, heartfelt country vibes in Harveys Outdoor Arena on Saturday 24th July 2021. 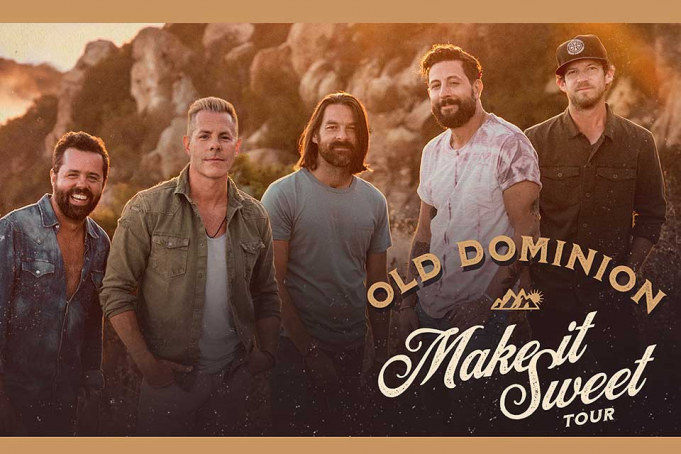 Book your tickets now and join country rock band Old Dominion at Harveys Outdoor Arena on Saturday 24th July 2021.
Old Dominion is made up of members Matthew Ramsey, Trevor Rosen, Whit Sellers, Geoff Sprung and Brad Tursi. The band was originally formed to showcase songs that individual band members had written for other artists, such as Luke Bryan's Light It Up and Cole Swindell's Remember Boys. The success of their songs led the band to self-release their first EP, It Was Always Yours, in 2012. Their song, Dirt on a Road, was the first to receive significant airplay as a band.

In 2014 they released their self-titled EP. Before their first studio album, Meat and Candy, was released in 2015, their EP single, Break Up With Him, reached number 1 on Country Airplay. In 2020 the band won Vocal Group of the Year and Song of the Year with One Man Band in the Country Music Association Awards, proving that their collaborative attitude and ability to perform as a cohesive band will be recognised and appreciated. They have recently released the single, I Was on a Boat That Day.

Save Saturday 24th July 2021 in your diary for an evening with Old Dominion at Harveys Outdoor Arena and book your tickets now.