Sammy Hagar And The Circle Tickets

That's right! Coming to Harveys Outdoor Arena LIVE on Sunday 2nd July 2017 is the powerful supergroup project, Sammy Hagar and The Circle! These guys will be bringing all of the epic energy as they perform songs from all of their backgrounds in music… as they share the spotlight, they take it in turns to give a full rounded concert to fulfill all of their fans!

Tickets are NOW on sale – don't miss your chance, book yours today! 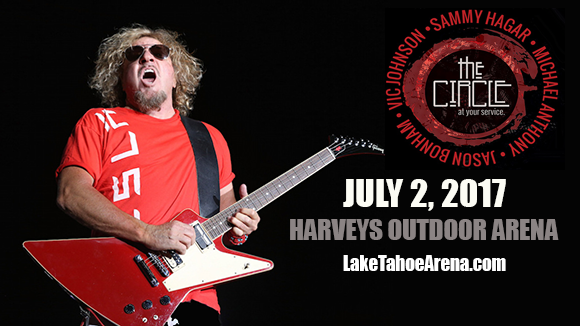 Known as the Red Rocker, Sammy Hagar hardly needs an introduction with his hard hitting sound. His sound is so prominent in the history of music, since his debut back in the 1970's, throughout to the 1980's with his hit song "I Can't Drive 55". The vocalist took over from the original singer of Van Halen and was shot into mainstream success! Later on he would leave to embark on a solo mission and return for a reunion tour, lasting two years.

Now, after all of his features across the board, he is the lead member of The Circle, along with; long-time bassist Michael Anthony, Jason Bonham and Vic Johnson – together they celebrate 40 years of hits! Get ready to catch them this coming summer! This line-up is unmissable and a rare opportunity to hear all of your favorite classics in concert, from Led Zeppelin, Sammy Hagar's and Van Halen's back catalogue!