Country music superstar Tim McGraw will treat fans to something completely different as he brings his Songs of America book tour to Harveys Outdoor Arena on Friday 14th June 2019! The new literary project, which is titled Songs of America: Patriotism, Protest and the Music That Made a Nation, was written with Pulitzer Prize-winning biographer and presidential historian John Meacham and takes a comprehensive look at classic American songs liek Bruce Spingsteen's "Born in the USA"! 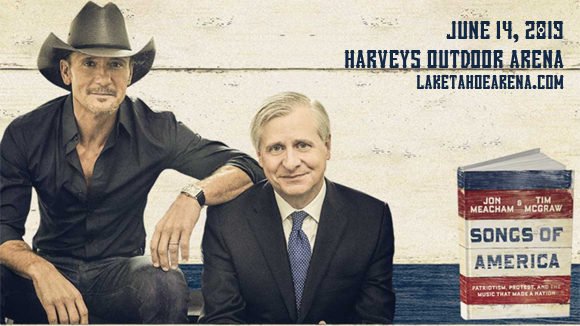 One of the world's best-selling music artists of all time, having sold more than 75 million records worldwide, Tim McGraw is an American country singer, songwriter and actor. McGraw released his eponymous debut album in 1991, but it was his 1994 follow-up, Not a Moment Too Soon, that was his breakthrough hit, scoring him several top 20 singles, two ACM Awards and ending 1994 as the best-selling country album of the year. His success has continued over 15 studio albums, with 10 of them reaching number one on the Billboard  Top Country Albums chart. His 15 albums have also launched 65 singles in total, 25 of which reached number one on the Hot Country Songs or Country Airplaycharts, and three of which ("It's Your Love", "Just to See You Smile", and "Live Like You Were Dying") became the top country songs of 1997, 1998, and 2004 according to Billboard Year-End. McGraw has taken home several awards throughout his illustrious career, including three Grammy Awards, 14 Academy of Country Music awards, 11 Country Music Association (CMA) awards, 10 American Music Awards, and three People's Choice Awards, and his Soul2Soul II Tour (with wife Faith Hill) is one of the highest-grossing tours in country music history, and one of the top five of any musical genre.